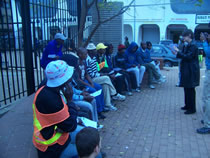 Rationale: Several ADF members have complained of having been arrested arbitrarily when walking in the street, sitting in a taxi, etc., on the pretext of them ‘loitering’. They have been detained (in most cases in Hillbrow Police Station) and asked to pay a fine of R300. Some have been subject to more abuse (documents taken and destroyed). At some point the ADF Chair himself went to Hillbrow police station to support one ADF member who had been arrested. The issue of arrest for loitering is repeating itself on a weekly basis. It also affects students from Wits, especially foreigners. ADF felt it was necessary to understand better this process and take measures to protect its members. First by engaging with Hillbrow (and beyond, all inner city) Police Station commissioners, to build a common strategy to fight police abuse, corruption, and harassment of migrants (see report on workshop with the Police); secondly by looking at how one can fight against arrests for loitering per se. In this regard, the encounter with Wits Law Clinic has proved very helpful Some lawyers are specializing in fighting the Minister of Safety and Security about these arrests for loitering, which may prove to be unconstitutional (the bylaw has not yet been challenged in court). Wits Law Clinic, when provided with the correct documents (notification of rights + receipt or admission of guilt), is able to win law suits against the Ministry of Safety and Security with a large rate of success. They are open to any person who has been arrested for loitering, every Friday, 8.00-12.00.