The Sharing Circle approached the African Diaspora Forum for their assistance in organizing a Christmas party for disadvantaged migrant children of Johannesburg.

The Sharing circle is an non-profit organization aiming at ‘making a difference in people’s lives’and sharing such experiences, and is currently focusing on the theme ‘Integration of non-South African in the South African society’. The long term vision includes the evolution of a social entrepreneurship initiatives incubator, to ensure that all ideas born out of sharing are given a fair chance of becoming impactful projects to uplift the African continent. 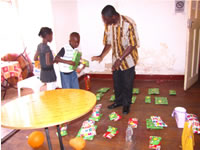 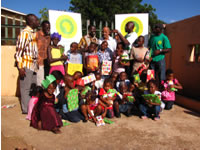 The Sharing circle is an non-profit organization aiming at ‘making a difference in people’s lives’ and sharing such experiences, and is currently focusing on the theme ‘Integration of non-South African in the South African society’. The long term vision includes the evolution of a social entrepreneurship initiatives incubator, to ensure that all ideas born out of sharing are given a fair chance of becoming impactful projects to uplift the African continent.

For Christmas, the Sharing Circle intended to organize a party for about 30 disadvantaged migrant children aged between 3 and 7 years old, and hand over Christmas gifts. They asked ADF for assistance in identifying the beneficiaries and helping organizing the event. ADF approached the families that they helped reintegrating into South African society (in Bertrams more specifically) after the May 2008 xenophobic attacks. The Ivorian House in Yeoville was identified as the venue for the party, due to its easy availability and capacity.

The party took place on the 20th of December 2009. About 30 children and 6 mothers arrived to the Ivorian House, transported through a mini bus kindly made available by a South African - Ivorian couple. Children were shy at the beginning, not knowing the place nor what to expect. As a number of ADF and sharing circle members were present and started interacting with them, they gradually gained confidence and made the party a vibrant one.

Marc Gbaffou presented ADF, Pie Pacifique presented the Sharing Circle. African music and children songs were played, some children started dancing. They were given food and drinks, and their Christmas gift, by the Ivorian children who were present in the Ivorian House.

They were all eager to be the first to get their gift – but were told there was a gift for each of them. Clothes were also provided to the mothers who were present; many mothers in fact did not dare coming as they thought the party was only for children. The party ended with group, family pictures being taken, children enjoying posing for them.

Mothers were giving news about their family situation, more than one year after their reintegration in Bertrams. Most of them were still struggling, and were all the more grateful for the gifts and the party since at least it gave their children an enjoyable Christmas.

The view from The Sharing Circle

In the warm afternoon of Sunday 20th December 2009, the Ivory House in Yeoville was a space filled with hope, joy and love for and from 29 girls and boys aged between three and seven years who were making their own Christmas Party so fun and quite vibrant

None would have told that these are children from migrant families who were victims of the xenophobic violence witnessed in Johannesburg in May 2008. They were singing, dancing, laughing, and spontaneously expressing their love and gratitude

Equally grateful for the opportunity were those who contributed to make the event a reality. It was initiated by the Unity Sharing Circle, an initiatives aimed at bringing people and organisations together to share their experience, meaning and opportunities of making a difference in society.

The Unity Sharing circle initiated the event and collected contribution from individuals who wanted to create such a special occasion for the migrant children who would not otherwise have means to have such a privilege. The African Diaspora Forum, one of the participating organisations in the Unity Sharing Circle, helped to identify the beneficiaries and the venue as well critical logistics such as the transport of the kids to and from the venue.

"It is a priceless privilege to be her and witness this kind of pure love life from the children! None can tell that they come from migrant families with massive social and financial challenges. I am so glad I was here to witness this", commented Tom McCarthy, one of a handful of people who contributed to make that event a reality.

The Sharing Circle’s representative Pie-Pacifique Kabalira-Uwase confirmed that they intend to have a similar event in 2010 at a bigger scale so they can reach many more unfortunate children in Johannesburg, as well as create the opportunity for those who are willing to make a difference through contributing to such a gracious gesture. "It doesn’t really take enormous resources to create this", he remarked. "All you need is to be willing". 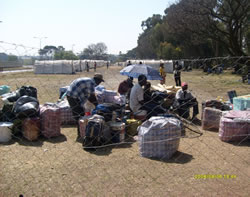 The African Diaspora Forum wishes to express its deep gratitude to the Star newspaper, and in particular to its Chief Editor, Moesgien Williams, for his support, his vision, and the trust he put in us – at the time a very young organization.

ADF is also very grateful to Gift of the Givers and the Red Cross, mandated by the Star to work with us, to support the organization and management of relief to the victims of xenophobic attacks, from May to November 2008.
This report is dedicated to these victims.

Over sixty were killed and more than six hundred injured. These attacks, which had an organized component, quickly spread from Alexandra township (where they received a large media coverage) to the Johannesburg inner city, townships and informal settlements of Gauteng (in particular in Ekurhuleni Metro), as well as to other provinces. Read the full report…

The way forward - Living together

Since the xenophobic attacks, while continuously working on the organization of the Pan-African carnival in Alexandra as a means to start dialogue, ADF has committed itself to keeping in touch with the people who took refuge at the police stations (Cleveland, Jeppe, …). ADF has consistently visited the displaced in camps when they were moved down there (Glenanda/Rifle Range, Germiston, Midrand) and tried to engage them so as to help them find a solution to their situation. This has never been an easy process, nevertheless in Glenanda ADF had already helped the Tanzanian Embassy to repatriate most of its nationals wishing to leave South Africa back home. In order to do so, ADF has organised the registration of Tanzanian people at Glenanda camp and their signing that they wanted to leave.

On Sunday 22nd of August, while visiting various camps, ADF was refused entry at Rifle Range and told that the situation was becoming very tense inside, following the incidents with Home Affairs representative around the issue of registration, a fews days before. The manager of the camp mentioned that people might be removed to Lindela soon. People from the camp standing at the gate also told ADF that a lot of intimidation was going on inside the camp. When hearing on the news that 800 people had been taken away to Lindela the following Wednesday, ADF members went to Glenanda only to find that the tents had indeed been removed and that people were now at Lindela. They drove to Lindela at night and came across a crowd of men, women, babies and children with heavy luggage getting out of the repatriation center, in the dark and walking along a dirt road to access the nearby road, namely the R28 going from Krugersdorp to Randfontein. They settled there in front of an Engen fuel station. Read full report…